I had the privilege of being featured in a podcast created by my friend, Chrys Peterson.

The podcast shares inspirational stories of individuals whose lives changed in just a moment.

To hear how mine changed, click the link below. It was an honor sharing the life of Virginia Hamilton, the most honored author of children’s literature. In gratitude to Ohio Humanities for underwriting my presentation, and the Ohio History Connection/National Afro American Museum and Cultural Center for hosting.

Check it out here: https://youtu.be/sR4_hllOqlo 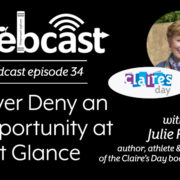 It was an honor and pleasure to be interviewed by Debbie Gonzalez for her podcast. Debbie inspired me through her inciting questions about love, loss, and celebrating life. More so, she suggests that I was chosen for my path, an incredible thought. Here’s to all who have guided and supported me on my journey. You were chosen as well.

This weekend I had the opportunity to be surrounded by amazing creators of children’s books. Now, I know what you’re thinking. As the co-founder of Claire’s Day, a children’s book festival, this would not be unusual for me. In my role as an author, this isn’t necessarily a new experience either, as I’ve been fortunate to attend many Society of Children’s Book Writers and Illustrators meetings and conferences.

But, this was different.

This was a writing workshop specifically for nonfiction children’s book authors, editors and agents.

I felt like the nonfiction kid-lit shelves at my local bookstore literally came to life in front of my eyes as I met my fellow attendees. Writers I only knew through common on-line writing groups or social media were there, live and in person. I met scientists, educators, and biographers, all passionate about sharing their discoveries in creative and exciting works with children of all ages.

These writers have created works on everything from the history of dogs, to the significance of road kill. It was a thrill to meet peers who have written biographies I’ve read as mentor texts, admiring their style and structure.

I fan-girled over Candace Fleming, whose works range from stories about giant squids, to revealing, incredible biographies of Amelia Earhart and Buffalo Bill. I learned about the importance of “vital idea” of story and exciting page turns from Candace.

Jennifer Swanson, the creative genius behind the workshop, shared her excitement over establishing a nonprofit that provides author school visits to children who might not ever have the chance for this incredible experience otherwise. Jen participated in Claire’s Day last year, and it has been an honor offering her support and advice in this endeavor.

It was awesome meeting editors who are passionate about nonfiction, who are actively acquiring the manuscripts we are all creating.

Most of all, it was so refreshing to talk about research, back matter, interviewing subjects, challenges in getting experts to “vet” our manuscripts, agents who specialize in nonfiction, and all things related to the beauty and opportunities in this genre as an author.

I walked away from the experience feeling as though I have a whole new support group of writers who really “get” what I’m doing, because they are walking the same path. They speak my language.

My new peeps. Nice to meet you.