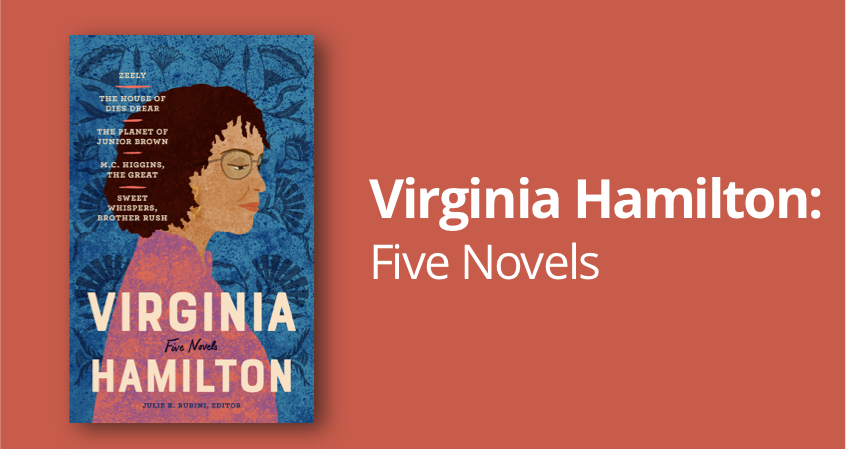 “Virginia Hamilton was a master storyteller. Her characters always leap off the page, and her ear for Black voices was pitch perfect. M.C. Higgins, The Great is my personal favorite, but today’s young readers will find each of these novels a treasure, both right-on-time and timeless. Is that not the definition of a classic?”

This volume features Hamilton’s most beloved and best-known works. The novels include Zeely (1967), The Edgar Award-winning The House of Dies Drear (1968), The Planet of Junior Brown (1971), M. C. Higgins, the Great (1974), for which Virginia received the Newbery Medal in 1975, and Sweet Whispers, Brother Rush.

The collection includes twenty restored illustrations, ten of which are presented in color for the first time, a selection of Hamilton’s writings and speeches, and a newly researched chronological biography.

Virginia Hamilton was born in Yellow Springs, Ohio on March 12, 1934. Virginia crafted stories from “Rememory,” a combination of her childhood experiences and tales woven by her elders. Virginia went on to become the most honored author of children’s literature. Sadly, Virginia’s writing voice was extinguished on February 19, 2002, when she died after a private battle with breast cancer. Yet, Virginia’s work and legacy live on through her 41 books for children of all ages, and through the Virginia Hamilton Conference on Multicultural Literature for Youth, held annually at Kent State University.

Editor Julie K. Rubini loves to share with younger readers the inspiring life stories of individuals who have made a difference in the world. Her works include Virginia Hamilton: America’s Storyteller, which received a Kirkus starred review and was listed on Bank Street College of Education’s Best Children’s Books, Outstanding Merit. Julie and her husband, Brad, established Claire’s Day, a children’s book festival in honor of their daughter.

Buy on Library of America
Scroll to top